What's New at the CO-OP

One-pot meals are brimming with possibility, and offer a huge range of flavours and textures. You can start a slow cooker in the morning to let... Read more

UPDATED: March 30, 2020 UPDATE: Safer Shopping at the Co-op In order to provide a safer shopping experience, we now have staff members greeting all customers... Read more

March Organization of the Month: Nelson & District Women’s Centre You can support the good work of our local Women’s Centre when you shop at the... Read more

Check out our monthly flyer for some of our best sales prices for March, including: Save 31% on Noble Bean Organic Tempeh Save 30% on Bioitalia... Read more

Reach us at the Co-op

The Co-op employs more than 160 staff in 12 different departments. From cashiers to buyers to clerks to assistant managers, everyone at the Co-op plays a critical role in serving members and customers, looking for and learning about great new products and suppliers, making our systems  run smoothly, and bringing new ideas to the table to help us grow healthy and strong.

Tory is originally from Salmon Arm, BC, and spent 10 years living in Calgary, after completing her Bachelor of Commerce degree at the University of Calgary. She then moved to Nelson and joined the Kootenay Co-op in summer 2016. Professionally, she started her career in public relations and then moved on to HR, taking on roles in training and development, recruitment and HR information systems. She also has experience in talent management and business process improvement. Tory is committed to ensuring that the Co-op is one of the best places to work in Nelson. 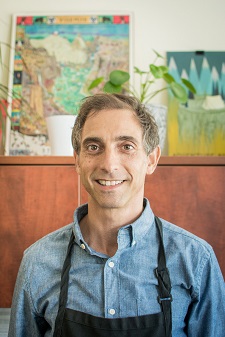 Ari Derfel has spent the last twenty years as an entrepreneur at the intersection of sustainable food and responsible business. He started the world’s first organic catering and sustainable event-production company in 2001, opened numerous sustainable restaurants in the San Francisco Bay Area, and dedicated two years as the national Executive Director of Slow Money, a non-profit focused on catalyzing investment in local food systems. Ari moved to the Nelson area in 2014 and previously served the Kootenay Co-op as Business Process and Development Manager and as a consultant. Read Ari’s bio (PDF).

Ashley grew up in Nelson and then spent the last 20 years living and working in Calgary. She moved back to Nelson in June of 2018 to join the Kootenay Co-op while Tory was on maternity leave. During her time in Calgary she completed a diploma and degree in Business with a specialization in Human Resources and has worked in  the human resources field ever since.

Ashley has worked in all areas of HR over her career with a recent focus on employee relations, leadership coaching, and change management. She has worked for multiple organizations of various sizes and has also spent time abroad working.  Ashley is committed to ensuring that the Co-op is one of the best places to work in Nelson.

Christoph has been with the Co-op since 2004 in various positions.  Currently, he is excited to be the manager of our Delicatessen.

Christoph was born into a cooperative in Friesland, Paraguay, and understands deeply the benefits of the co-op structure.  He started out in commercial agriculture in the ’80s, working with pigeon, chicken, quail and pheasants and later obtaining a diploma in Livestock Agriculture from the University of the Fraser Valley.  He became involved with organics in the ’90s, raising goats, chickens and ducks, working for Meadowbrook farms, running a market garden and developing an urban farm on the outskirts of Nelson.

Visit the Cheese and Tapas department.

Mary has been with the Co-op since 2003, starting as a cashier, then moving into a variety of roles in the Wellness department, now settling on Wellness Manager.

Mary’s interest in alternative health and wellness was first piqued at age 15, when she read Harvey and Marilyn Diamond’s Fit for Life. She is deeply interested in performance nutrition and health optimization from an extreme fitness perspective. Mary also loves to cook for friends and family and spend ample time outside.

Born the second son of poor students in Berkeley, California, Bruce moved to the Koots in 1986 for love and small town-living. Before starting at the Co-op in 2018, he worked in various industries including forestry, ski lodges, geology, and construction.

As Facilities Manager, his job has a huge variety, from janitorial and maintenance to health and safety. Put simply, Bruce keeps everything in the store running smoothly.

When he’s not at work, he enjoys spending free time with his partner, kids and friends, and he’s passionate about getting out in nature hiking, skiing, canoeing and sailing.

Ben started working at the Co-op in 2006, and he gained experience in both the Grocery and Produce departments before taking the helm as Produce Manager. Ben immigrated from the UK and brings with him a wide range of experience. He grew up in a family that owned a restaurant and with a mother who taught cooking. Ben worked four years with the UK’s Soil Association, which also contributed to his reverence for, and understanding of, food issues.  Ben has also cooked for guests in ski resorts in France and the US.

Ben has also been involved with other related groups including Kootenay Co-op Radio, Kootenay Local Agricultural Society (KLAS) and most recently FarmFoodFork.  The Co-op’s role at the forefront of local, dynamic business is exciting to be part of and one with which Ben is pleased to evolve.

Erin grew up in Nelson and still vividly remembers the smell of fresh ground peanuts that permeated the Gerick’s location of the Kootenay Co-op. She returned to Nelson after spending her 20’s on the coast studying, working and having a whale of time. After living in the woods with a big garden and becoming a mother, she settled on entrepreneurial pursuits. Wild Onion Nutburgers was born! The Nelson-famous recipe was generously passed down from her mother, Susan Morrison, and Susan’s former business partner, Panny Taylor. Production began in the basement commercial kitchen built by her father, Ian Morrison.  Erin later sold her thriving Nutburger business to move into the Holistic Health Coaching, where she remained until her time at the Co-op.
The Co-op scooped her up one caselot, when we needed help for a few days. Four years later and with few positions underneath her, Erin has found herself happily leading the Kootenay Co-op Grocery Team as the Grocery Manager.

Vale was promoted to the Front End Manager in October 2019. Her role is to oversee cashiers and customer service. Previously, Vale worked as a cashier and in the Human Resources Department.  She runs a happy team of almost 30 staff.

Tyler grew up on Vancouver Island loving nature, the mountains, and snowboarding. After graduating, he moved to Vancouver, working in grocery stores in the summer and the mountains in the winter. One summer, he landed in a meat department and found a new passion, and soon took on an Meat Cutter Apprenticeship. Eight years passed in the big city and Tyler had moved up to meat department manager, but he longed to be back in nature. Tyler quickly found the Kootenay Co-op and it was a perfect fit!

“Getting to know the farmers that grow for us and the community that we get to support has been an amazing opportunity you don’t get at other grocery stores,” Tyler said. “The Kootenay Co-op is different from the rest and I am very excited to be a part of that lifestyle.”

David has worked for over 15 years on behalf of the environment and food security, connecting people with the places that sustain them through education, advocacy, and community-building. David also has a Master’s Degree in Dispute Resolution and has lived in Nelson since 2009. David literally shed a tear the first time he walked into the Kootenay Co-op, and he was very proud to join the Co-op team in 2017.

The desire for more room, cleaner air and a better work/life balance brought Sean to the relative peace and tranquility of our little community.  He managed to escape the stressful social environment of big city life and has been working at the Co-op since October 2014.  Sean has a Bachelor of Commerce degree, a post-secondary Chartered Professional Accountant designation and is a member of the Canadian Institute of Chartered Accountants.  His responsibilities include management of the Coop’s financial risks.  He is also responsible for financial planning, record-keeping, data analysis and reporting.  On a daily basis, he supervises the finance team and assists the General Manager on strategic and tactical matters as they relate to budget management, forecasting, cost-benefit analysis and the acquisition of new funding.  He loves  using his skills to support the Co-op’s growth. Sean is very pleased to be working in a Co-operative organization where profit is not the sole objective and community, people and ethics are highly valued. When he’s not a t work, Sean enjoys spending time with his family.

Born and raised in the Kootenays, Amanda explored the wider world while studying and working in Vancouver before returning to the Kootenays to start a family. After a management stint at Whitewater, Amanda joined the Kootenay Co-op team as the Grocery Manager in 2017 before becoming the Co-op’s Sales and Merchandising Manager.  In this role, she helps coordinate product merchandising and promotion across the store.

Amanda is on maternity leave until Oct 2020.